The attack on Al Rawdah mosque in the Sinai last Friday, during which Islamists claimed at least 305 lives, was quite possibly the deadliest terrorist atrocity in modern Egyptian history and one of the largest terrorist attacks worldwide. Because the mosque was often frequented by Muslims linked to a Sufi order, the massacre also brought to light the deeply flawed ways Sufism is discussed—both by those who denigrate Sufism and by those who admire it.

Extremist groups like ISIS promote the idea that Sufism is a heterodox form of Islam, and then go further to declare Sufis legitimate targets. But it’s not just violent extremists who foster the heterodoxy misconception. In Saudi Arabia, for example, crown prince Mohammed bin Salman claimed on Sunday that “the greatest danger of extremist terrorism is in distorting the reputation of our tolerant religion”—yet intolerance with regard to Sufism is the bedrock of much of the purist Salafi approach that underpins the Saudi religious establishment.

That’s not to say that all those who self-describe as “Salafi” claim that Sufism ought to be met with violence. But many, if not most, deny its centrality within Sunni Islam. Certainly the vast majority of the Saudi religious establishment espouses that kind of belief, which is a massive challenge that the crown prince will have to tackle if he’s serious about his promise to spread “moderate” Islam.

Misunderstanding the Victims of the Sinai Massacre

The birth of the purist Salafi movement (which many pejoratively describe as “Wahhabism”) saw preachers inspired by the message of 18th-century figure Muhammad bin Abdul Wahhab attacking Sufism writ large in an unprecedented way. While presenting themselves as the orthodox, these types of purist Salafis were actually engaging in a heterodox approach. Many of these figures had to ignore or rewrite large chunks of Islamic history in order to present Sufism and Sufis as beyond the pale.

Ahmad bin Taymiyya, a commonly quoted authority for Salafis, for example, was reportedly a member of the Sufi order of Abdal Qadir al-Jilani. The Sufi affiliations of many medieval authorities have been airbrushed from history in several modern editions of their texts published by Salafi printing houses. Yet, there were virtually no prominent Muslim figures who cast aside Sufism in Islamic history. When followers of ibn Abdul Wahhab attempted to do so by describing Sufis as outside the faith, they were themselves decried by the overwhelming majority of Sunni Islamic scholarship as indulging in a type of heterodoxy because of their intolerance and revisionism.

While some who portray Sufis as heterodox do so with malicious intent, many fans of Sufism in the West seem to agree that Sufis are heterodox—it’s just a type of heterodoxy that they prefer to the normative mainstream of Islamic thought, which they seem to think is different from Sufism. Ironically, the well-meaning nature of this misinformed perspective echoes the fallacy that extremists promote.

And it is an extraordinary fallacy. Until relatively recently, it would have been unthinkable for students in Muslim communities to consider Sufism anything other than an integral part of a holistic Islamic education. The essentials of theology, practice, and spirituality—that is, Sufism—were deemed basic, core elements of even elementary Islamic instruction. And religious figures known for their commitment to Sufism would not have been considered a minority; they would have been by far the norm. Indeed, the very label of an Egyptian “Sufi minority” being bandied about since the mosque attack is a peculiar one: Sufism isn’t a sect—it’s integral to mainstream Sunni Islam.

The most famous Sufi in the West, as shown on Amazon bestseller lists, is Rumi, Afghan poet extraordinaire. Another renowned figure is Ibn Arabi, a Spaniard of the 12th century. But few in the West seem to realize that such figures, while indeed Sufis, were very much within the Islamic mainstream. Rumi, for example, was an author of fatwas and a specialist in an orthodox rite of Sunni Islamic law (the Hanafi school); Ibn Arabi was even more steeped in Sunni legal expertise, to the point where he was described by many medieval authorities as being capable of forming his own school of law.

That doesn’t mean that Sufis were never singled out for criticism in traditional Islamic scholarship—they were. Those criticisms were issued by Sufi scholars themselves, much as expert jurists criticized what they saw as shoddy attempts in jurisprudence, and specialized theologians critiqued amateurish forays into theology. One modern critic, a famed Sufi of the Comoros, said, “If we were better Sufis, everyone else wouldn’t think we are anything but good Muslims.”

Another myth is that Sufis are generally apolitical or eschew any martial activity. Historically, that certainly was not the case. Sufi figures like Abu-l-Hasan al-Shadhuli and Ibn Abdal Salam (the latter a famous jurist of his time) were at the forefront of campaigns to defend Egypt from the armies of King Louis of France. The Libyan struggle against the Italian fascist occupation was led by Sufis of the Sanusi order of Sufis, including the famed Omar al-Mukhtar. Shaykh Abdal Qadir al-Jaza’iri was a militant opponent of the French invasion of Algeria in the 19th century, while Imam Shamil of the Caucasus fought against the Russian incursion into his own land. But while they most certainly believed in that martial endeavour, and called it jihad, it was a jihad that meant that the likes of al-Jaza’iri fought to protect Christians; a jihad that meant that al-Mukhtar refused to mistreat prisoners of war; in other words, a jihad that was constrained by the mainstream understanding of Sunni Islam.

This activist trend among Sufis remains in existence today. In my own research over the years, I came across teachers of Sufi texts like Shaykh Seraj Hendricks of South Africa and Shaykh Emad Effat in Egypt. The former was detained for activism against apartheid, while the latter was killed in the midst of protests in late 2011. This is to say nothing of the scores of members of Sufi orders in Syria who participated in the Syrian revolutionary uprising against the Assad regime, as well as against ISIS. It is also true that some Sufi figures engaged in actively supporting autocrats and repressive governments—which other Sufis critiqued for what they saw as inconsistency. That critique has everything to do with what such Sufi figures see as orthodoxy and orthopraxy in the Islamic tradition.

It’s too easy to cast Sufis as a quasi-sectarian group that is somehow detached from Islam. Sufism never betrayed Islamic orthodoxy; if anything, it is Islamic orthodoxy in its purest form. Both those who denigrate Sufis, like ISIS and the Saudi religious establishment, and those who admire Sufis, like Rumi-loving Westerners, would do well to finally recognize this. Otherwise, we all risk betraying Islamic history.

see also: commitment to Sufism by Muslims scholars being the norm: bit.ly/_tsw-shy 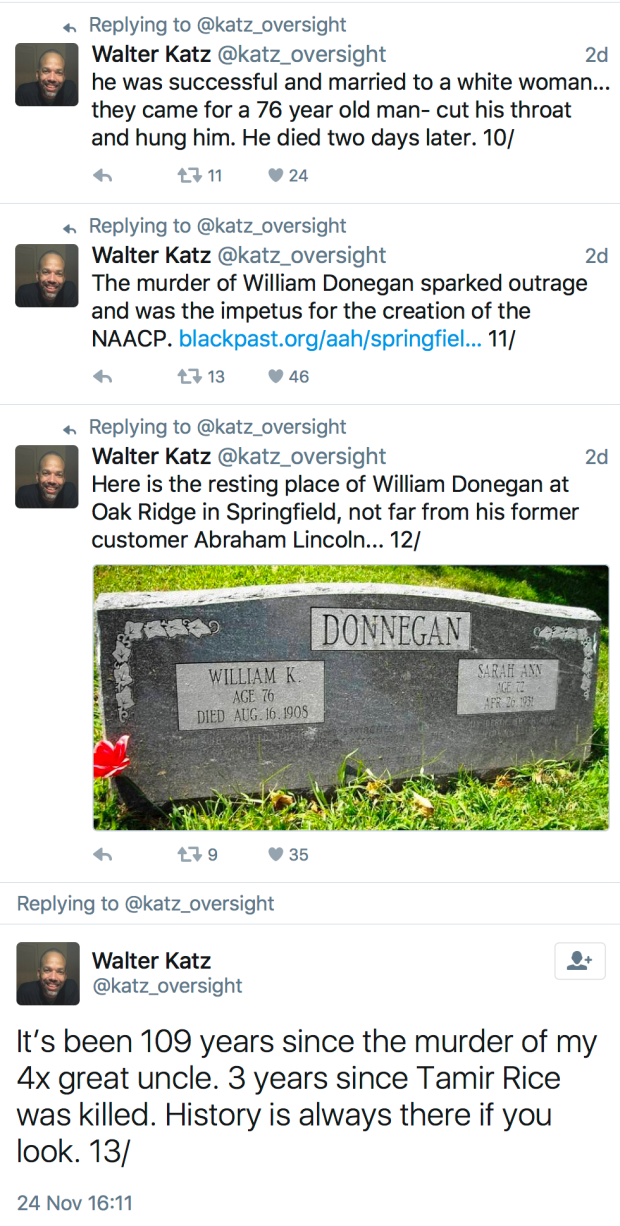 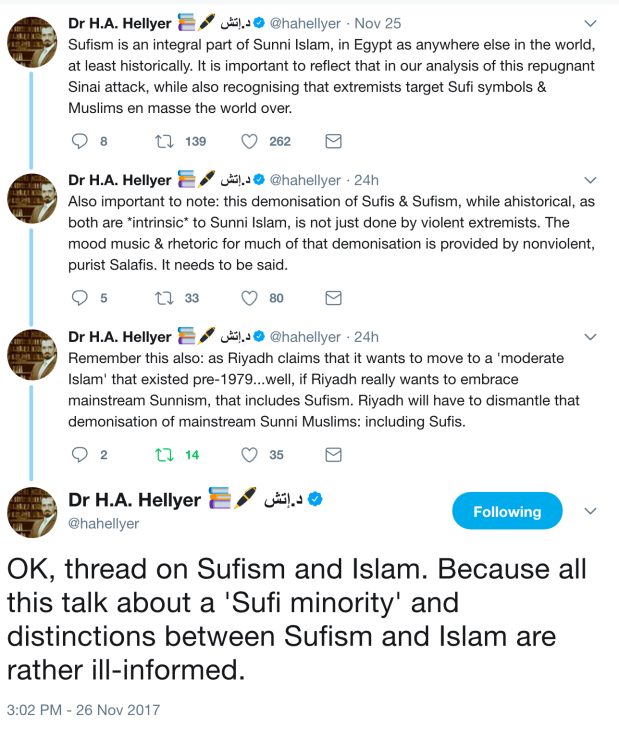 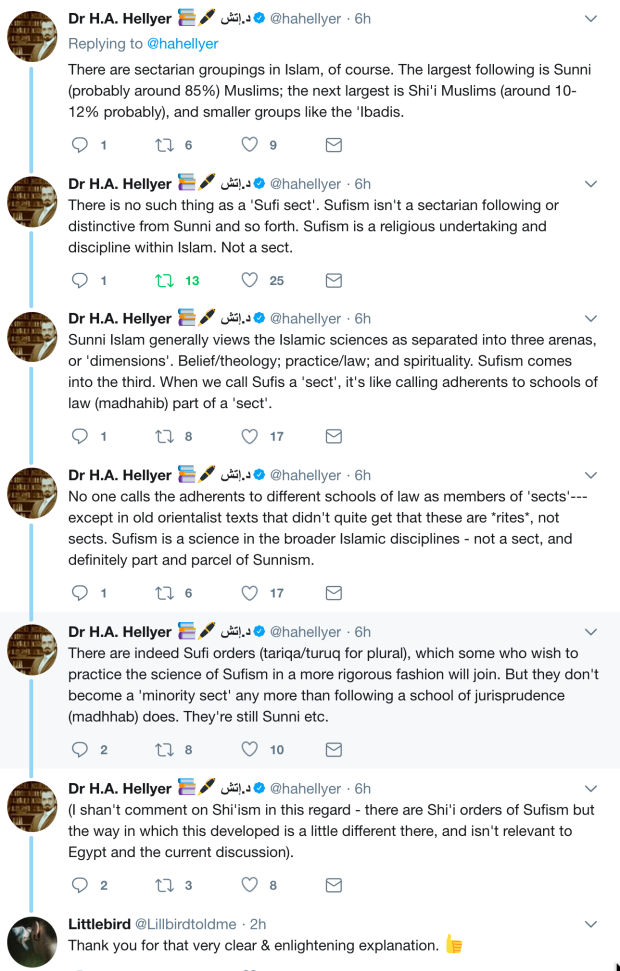 His book:
The People Are Going to Rise Like the Waters Upon Your Shore: A Story of American Rage Hardcover – August 15, 2017